A voice from the back of the room piped up, “Yeah, right.”

From Is “double positive meaning negative” a common phenomenon? on the Linguistics StackExchange:

Yes, for example, it’s the same in Italian “sì, sì” (= yes, yes), but it’s ambiguous, it depends on intonation and not on the words themselves; this means that “double positive = negative” is wrong speaking about the words, but it works through other means. Changing intonation, that “sì, sì” can be absolutely positive as well. We also use a small variation in written language to substitute the intonation. We write “seh seh” or “se se”… More or less like the English slang variation “ye ye”.

And more about Sarcasm in The Lousy Linguist:

There are 3 interpretations of “yeah, right” in American English:

Thanks to the influence of Seinfeld and Friends throughout the 90s, Sarcastic is probably the default use these days…

is a grammatically valid sentence in the English language, used as an example of how homonyms and homophones can be used to create complicated linguistic constructs. It has been discussed in literature since 1972 when the sentence was used by William J. Rapaport, an associate professor at the University at… Buffalo. 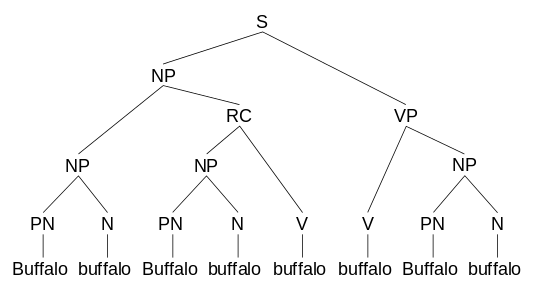