PZ Myers wrote an essay claiming that “Ray Kurzweil does not understand the brain”, which has some good points, but is entirely based on the premise that Kurzweil says we will reverse-engineer the brain from the genome, that contains 25 million [relevant] bytes, or a million lines of code (second-hand comments on erroneous press reports, taken out of context).

Kurzweil responded to the claims in a lengthy article, well worth the read. The relevant part regarding the quote that was taken out of context is

I mentioned the genome in a completely different context. I presented a number of arguments as to why the design of the brain is not as complex as some theorists have advocated. This is to respond to the notion that it would require trillions of lines of code to create a comparable system. The argument from the amount of information in the genome is one of several such arguments. It is not a proposed strategy for accomplishing reverse-engineering. It is an argument from information theory, which Myers obviously does not understand.

The reasoning behind the “million lines of code” calculation makes sense if you think about the Kolmogorov complexity of the DNA responsible for coding the design instructions for building the brain.

Trying to reverse engineer a complete brain biologically, in order to have a computer simulate the same principles (only faster) is dumb. I’ve read Kurzweil’s How to Create a Mind, and he knows his shit. He gave specific examples of how his team gained some insights that helped improve speech recognition from reverse engineering several processes.

Mostly I think that in general the human population, myself included, is an incredibly stupid, short sighted, nasty, egotistic species with occasional streaks of artistic, political or scientific brilliance. Hopefully we can do better than simulate that.

How to Create a Mind

So excited, just received a package with the new book by Ray Kurzweil, “How to Create a Mind” (and with it, an inscribed bookplate!) 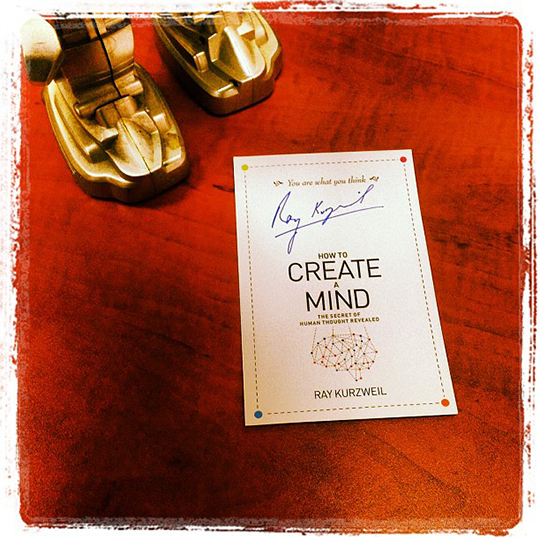